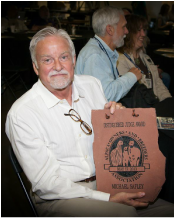 Mike Safley -
Michael Safley was born and raised in Oregon.  He attended the University of Oregon and served in the U.S. Navy Seabees, doing two tours of duty in Vietnam.  Prior to 1990 he was a Real Estate developer and a builder.  Today Mike and his wife operate Northwest Alpacas, home to more than 300 alpacas.

Mike was elected president of the fledgling Alpaca Owners and Breeders Association (AOBA) in 1990 and the Alpaca Registry (ARI) in 1996.  In 1996 he co-founded Quechua Benefit, a charity that works with alpaca breeders in Peru.  While serving as president of AOBA, he conceived of and became the first editor for Alpacas magazine. He has been instrumental in the development of policies and practices for AOBA and The Alpaca Registry, Inc. (ARI).  In 2013, Mike was the first recipient of AOBA’s “Distinguished Judges Award”. Mike has written several brochures for the alpaca industry which continue to be printed by AOBA today including: “The Alpaca Investment,” “Fleece to Fashion” and “Alpacas the Color” book.  He is also the author of the following books: Alpacas: Synthesis of a Miracle, Ideal Alpacas from Myth to Reality, The Alpaca Shepherd, The Alpaca Chronicles and he co-authored The Art and Science of Alpaca Judging.

Over the last 30 years, Mike has conducted seminars and lectures worldwide to audiences in England, Australia, New Zealand, Canada, Germany, United States, and Peru.  He is a past Senior AOBA Judge and has judged alpaca shows in the United States, England, Australia, Canada, and Peru.  The major shows he has judged include the AOBA National (7 times), MAPACA, The All American Futurity, British Futurity, Alpaca Western Extravaganza, The North American Alpaca Show, The Great Western Alpaca Show, The Kentucky Classic, and the Estes Park Wool Market. He is qualified in both State and U.S. Federal courts as an expert witness on alpacas.
EDUCATION - NETWORKING - SUCCESS - THRIVE - SUPPORT - EDU97701.COM